Stratford Playwrights was started by Reg Mitchell in January 2001 with the intention of developing the writing skills of members for work that might eventually be performed on  the stage or in other media.

In the first eleven years, seventy plays have been performed, mainly in the town, but also in Birmingham, Edinburgh, Cambridge and London, as well as on BBC radio and television. We used to mount performances at the Civic Hall, but, since 2006, we have offered free pub theatre at the Dirty Duck, where members can obtain an audience response to work performed script in hand.

Taking advantage of RSC offers, we have performed at the RSC Summerhouse, the Other Place and at the first Open House in December 2010. We have contributed to the Shakespeare Birthplace Trust birthday celebrations. We have benefited from lectures and workshops, particularly those offered by the RSC as part of the open house/open stages project.

As we enter our second decade, we are pleased to announce that Alistair MacGowan has agreed to be our honorary patron. 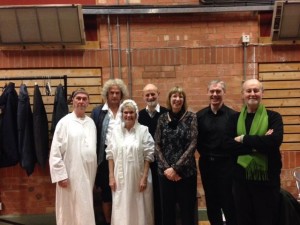