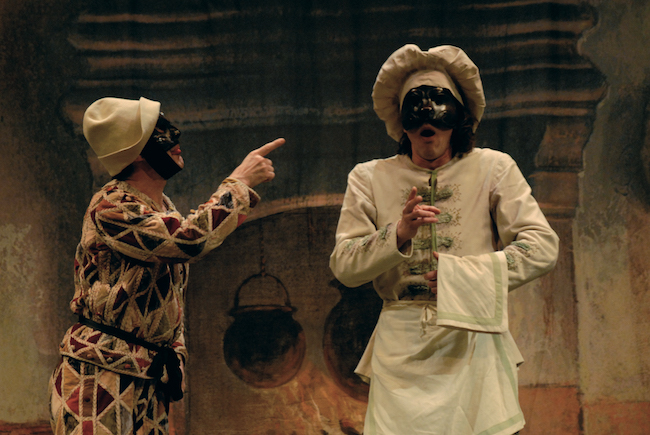 Join us at The Bear Pit Theatre for two exciting workshops about Commedia. Participants will learn about the beginnings of Commedia dell’Arte, its use of mask, body and voice, and its reworkings in the present.

The Commedia dell’arte represents the beginning of modern theatre. Its basic plots actually inspired so many of the theatrical forms that followed, including elements which seeped into Shakespeare’s work and, a few decades later, into Molière. But above all, Commedia dell‘arte is capable of inventing and inspiring new plays and shows, starting from the actor’s work on his body and voice, those “popular“ instruments available to all human beings.

Stefano Guizzi, actor and teacher
Raised in the US, France and Italy, Stefano graduated in 1990 from Giorgio Strehler’s Scuola di Teatro, part of Milan’s Piccolo Teatro, where his  teachers were, among others, Giorgio Strehler and Ferruccio Soleri, and where he attended workshops with Carolyn Carlson, Ian McKellen and Cicely  Berry.  He made his debut in Strehler’s Faust I & II and in 1990 began to work alongside Ferruccio Soleri in Strehler’s Arlecchino Servant of Two Masters.  He has been in Berlin with Robert Wilson (Saints and Singing, by Gertrude Stein). He has worked with the following directors in Italy: A.R. Shammah, Stefano De Luca, Laura Pasetti, Guido de Monticelli, Gheorghe Iancu, Gigi Proietti. In 2016 he had a role in the production of Porgy and Bess at Milan’s La Scala. He play the lead in A Walk In Shakespeare Garden  by Maggie Rose, directed by Donatella Massimilla, a promenade show for parks and gardens. Since 2010 he has been working with Charioteer Theatre (Edinburgh).  He teaches a Playwriting class and a Commedia dell’Arte workshop at Milan’s Catholic University and has taught Commedia workshops, in collaboration with the Piccolo Teatro, in different parts of the world (Los Angeles, La Paz, Tokyo, Tehran, Moscow).  He is a member of the artistic committee of the Granara Ecovillage Independent Theatre Festival,

Donatella Massimilla, artistic director and director of CETEC and San Vittore Globe Theatre.  Donatella began her career as an actor with Franco Molè, after which she studied at Rome’s Sapienza University with Jerzy Grotowski. Later she worked for seven years at Santarcangelo Romagna’s International Festival. She graduated at the DAMS School of Performing Arts, University of Bologna, with Prof. Claudio Meldolesi. She specialized in Commedia dell’Arte at Venice’s celebrated Avogaria Academy. Once in Milan she freelanced at the Paolo Grassi Drama Academy, collaborating with several directors and playwrights, among whom Heiner Müller. In 1999 she founded CETEC, Centro Europeo Teatro e Carcere (The European Theatre and Prisons Association and Theatre Company). It is twenty years since she first stepped inside Milan’s San Vittore prison, and in the meantime she has continued to visit prisons all over Europe. Her new production, “San Vittore Globe Theatre. Atto Secondo” opened at the Piccolo Teatro Studio Melato on 10 December 2016.

Maggie Rose, writer and teacher.  Maggie teaches British Theatre Performance Studies at Milan State University. A dramatist and translator, she spends part of the year in the UK for her writing and research. She has led theatre seminars and writing workshops in the UK and Italy. Her stage and radio plays reflect her interest in issues of migration and multiculturalism as well as Shakespeare and have been produced in the UK and Italy. Her plays, some of them co-written, exploring Italian migration to Scotland, have been presented at the Edinburgh Fringe, Traverse and Gateway theatres (Edinburgh), Oran Mor (Glasgow) and Soho Theatre (London). She has recently penned the site-specific plays, Shakespeare, Secret Agent, A Walk in Shakespeare’s Garden, Harlequin and Shakespeare Ltd, for botanical gardens, parks and villas, reflecting her current interest in food and the environment in Shakespeare’s work. In 2016 in the context of Shakespeare 400, she co-organised the international conference-festival, “Will Forever Young” devoted to Shakespeare in popular culture.

Mace Perlman began his physical education for the theatre under Marcel Marceau at his École Internationale de Mimodrame in Paris. After studies at Stanford (BA, MA, Humanities), where he also received the Robert M. Golden Award for Excellence in Scholarship and Performance, Mace continued his training at the world-renowned Piccolo Teatro di Milano, appearing in Giorgio Strehler’s productions of Faust and The Servant of Two Masters. In the US, Mace’s acting has taken him from the Pearl Theatre to Hartford Stage, including many Shakespearean roles, notably Mercutio in Romeo and Juliet, the Fool in King Lear, the Welsh Captain Fluellen in Henry V and Owen Glendower in Henry IV, part 1, Antonio in The Merchant of Venice, and Claudius in Hamlet. He most recently played Creon in Sophocles’ Antigone directed by Karin Coonrod in Forlì, Italy. Mace has taught and performed at more than twenty colleges and universities using the masks of the Commedia dell’Arte; and he is currently working to develop the Academy of Renaissance Theatre, a cultural institution to be comprised of a professional company of players together with a school of theatre, language, and Renaissance culture.

Gilberta Crispino
Actor, dubber and radio broadcaster, Gilberta comes from a theatrical family and made her stage debut as a child actor. She trained at Rome’s “Studio Fersen”, attending singing and dancing classes. Her stage roles include: Pinter’s Victoria Station, Adriano Vianello’s Penelope’s Story, Molière’s Tartuffe, Donatella Massimilla’s New Theatre of Wonders, Goldoni’s The Innkeeper’s Wife, among many others.
For the last twelve years she has worked as an Associate artist of CETEC, “Centro Europeo Teatro e Carcere”, directed by Donatella Massimilla, and has toured Italy and Europe with the company, taking shows and running workshops in theatres and prisons. She is the founder and promoter of the cultural association, “L’ombra d’Argo”. As a dubber, she freelances with leading film, television and radio companies.